Posted on May 22, 2013 by billabbottcartoons

This post isn’t about cartoons, illustration, or art of any kind. But since we, as artists, are shaped by the world we observe and experience, it was my decision to share this with you.

I’ve been thinking about this day for a long time. It’s hard to believe that it’s come so quickly. Tomorrow marks 20 years that I’ve been a part of the greatest Navy that ever defended the seas. Any seas.

This is me as an E-nothing in Norfolk, Virginia attending a navigation school. Not to be confused with the more dapper Men In Black.

I joined after being a disgruntled stockbroker for too long. Since I was a little boy I’d always looked at the pictures of other men in my family, standing proudly in their uniforms – my father beaming with pride in his ROTC uniform during Vietnam, my uncle in the Navy in the height of the Cold War, my grandfather with a machine gun in Europe in World War II, my father’s great uncle as a Dough Boy in the trenches of the First World War – even my Great Grandfather’s grandfather as a fresh-faced young Zouave soldier in the Civil War where his brother died a horribly violent death in Louisiana - his bones lie there to this day, and where he was grievously wounded in the same battle. Family legend has it that in his twilight years, a parade was specifically re-routed to pass in front of the porch of his Brooklyn home to render him the honors, since his wounds left him largely immobile for the remainder of his life. From this tradition comes a pride I can hardly contain. 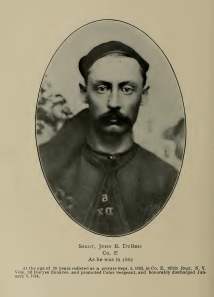 My Great-Grandfather’s grandfather, John DuBois. Brave, young, and forever changed by the horrors of war.

During the years I’ve served, I’ve been a navigator on the destroyer U.S.S. Arleigh Burke – a fantastic ship with the finest crew this nation could ever hope to assemble, and a member of one of the Navy’s Special Warfare units – the Special Boat Teams.

The U.S.S. Arleigh Burke returning across a tempestuous Atlantic Ocean after a very successful first Mediterranean deployment. I wasn’t on her when this image was taken. I’m okay with that.

The selection and training of which, at the ripe old age of 31, was the greatest experience, albeit one that required getting a beat-down of the highest quality, of my life (surpassed in quality of discomfort only by my attending SERE training at the spry age of 44! Still don’t know why I thought that was a good idea). My SWCC and SEAL brothers are, you may be rest assured, the finest, most honorable and dedicated warriors on earth. Period. Even though I am no longer active – my family deserves my full attention after so many years of sacrifice and separation, I still find myself chomping at the bit whenever I see a news story which may, or may not, be a possible arena in which my NSW brothers are operating. God Bless each and every one of you. Honor is a word that can be uttered by nearly everyone, but it’s a concept lived utterly by so few. Gentlemen, you are among the few. 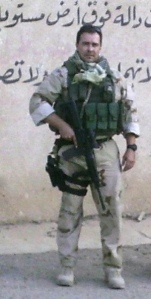 This is me in Iraq. I volunteered to help my team-mates in whatever way I could. If anyone tries to sell you real estate there, walk away.

While the Nation remains mired in a political morass, created largely by the greatest collection of rarified idiots ever to crawl out of the primordial soup, the people of this country never cease to amaze me in the depth of their goodness, in their unselfish response to their neighbors in need, and their resilience whatever the challenge. What greater honor can a man or woman have than to defend such a fine collection of human beings? It’s the intention of this post to state with unambiguous clarity, I love this country, I love our people, and from the bottom of my heart, thank you. Thank you for giving me the opportunity to defend all that I love most, and to be a part of this Navy. There is, nor will there ever be, a greater one. 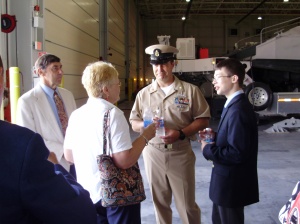 With my parents and oldest son at a ceremony at the team.

“I can imagine no  more rewarding a career. And any man who may be asked in this century what he  did to make his life worthwhile, I think can respond with a good deal of pride  and satisfaction:
“I served in the United States Navy”"
-John F. Kennedy  (JFK)

One Response to A Big, BIG Anniversary